“[In Avatar] Olafson…. transforms from a lonely Friday-night vlogger (video blogger) to a ghoul­ish, empty eye-socketed figure that’s a cross between Marilyn Monroe impersonator and a drag queen from hell. Olafson isn’t afraid to really go for it and crafts a theatrical persona that’s as riveting as a train wreck. When she digitally alters her own voice, first infantilizing herself before becoming a husky male, the effect is chilling.”

Marrying the physicality and immediacy of contemporary dance with the virtual ambiguities of online social networking, Avatar is a cross-disciplinary hub for experimentation and inquiry. As director and subject of her hybridized dance endeavors, Olafson engages what she calls a “duet with technology” – navigating digitally altered notions of exhibitionism, orientation, and identity.

This performance is part of an ongoing series that explores methods of creating, validating and disseminating one’s identity through the use of technology and the Internet. The work is inspired by the mantra ‘I post therefore I am’ whereby Internet users legitimize their existence by documenting their lives and uploading this media to personal webpages and blogs. Fragmented images from Olafson’s personal life are woven together with the distorted and satirical views of various real video blogger audio and video sampling.

Previously the series has manifested in paintings & drawings, installations, gallery performances, videos and a collaboration with new media artist Pierre Andrieux of France. Originally co-presented in October 2009 with Winnipeg’s Contemporary Dancers and nuna (now), in 2010 AVATAR was performed in North-Carolina, Toronto, Montreal, North Dakota and three cities in Ecuador. Most recently AVATAR received the “Buddies in Bad Times Vanguard Award for Risk and Innovation” at the 2010 Summerworks Theatre Festival in Toronto. In 2011 AVATAR looks forward to further touring to Ottawa, Edmonton and Nanaimo in Canada.

The development of this series is generously supported by The Canada Council for The Arts, Manitoba Arts Council, The Winnipeg Arts Council and Video Pool Media Arts Center.

At Sequences 2011 Freya performed and exhibited in the Reykjavík Art Museum. 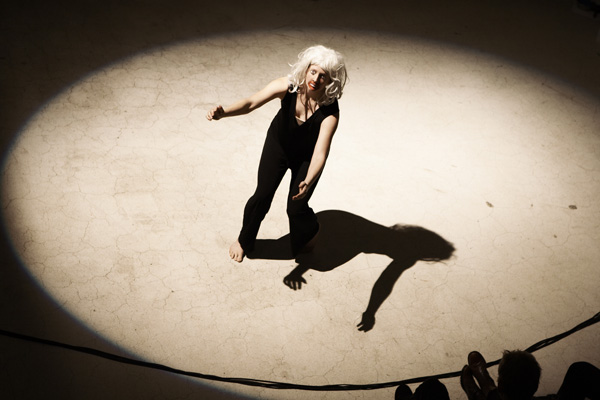