Sacred Flora
by Thora Solveig Bergsteinsdottir (IS) and Liv Nome (NO)

Welcome to the Sequences Art Festival, X edt. 2021, Off Venue Saturday 16th of
October between 16:00 – 18:00. Thora Solveig and Liv will present their main video work from SACRED FLORA and a live performance at 17:00. The venue is in the Artak105 Gallery at Skipholt 9, 105 Reykjavik, with support from Artak ehf.

The performance SACRED is an ongoing collaboration between Þóra Sólveig Bergsteinsdóttir and Liv Nome, since 2016 which was premiered at A! in 2017. They have shown it several times also in Norway and Iceland 2018/2019 with site-specific objects in installations. The shows are supported by the Norwegian Council of art – Kulturrådet. During the artist in residence 1-30 October 2021 at ArtAk350 in Grundarfjördur, they are continuing to develop their cooperation.

They opened the A! Performance Festival 7. Oct. 2021 with their performance SACRED FLORA. This consists of the finalized work of STANDING from SACRED, a video from the SEA and the video work FLORA which was presented as scenography for live performance. Additionally, they had two separate video works of a WATERFALL and a video collage of abstract images of RUST that was played simultaneously, together with place-specific objects from the sea to make a whole world on stage.

STANDING – sound and video performance is inspired by an older work of Thora Solveig called HER or she/here made in Norway where she lived and worked for a few years. This piece was a psychological work about the powerful wild nature reflected in human nature.
Thora and Liv are in STANDING present with a waterfall in the powerful nature of North Iceland. Their state of being represents the possibility to be merging with nature to receive the gift of life-force directly if we choose it. The piece is also picturing their motivation for standing with nature as a political move, and as an important part of who we are as humans in nature.

SEA is a new video work in progress from Grundarfjörður in the Snaefellsnes peninsula that makes the scenography for a live performance with Liv playing the blowing instrument Melodica and Thora Solveig playing the Fin-whale penis-skin drum made by Lene Zachariassen to evoke the sense of the great beings of the deep ocean.

FLORA is a music and video work by Liv and has scenes from her neighbourhood natural surroundings in the Oslofjord, and consists mainly of handheld spontaneous recordings depending on what happened around her during the time she was working on the project. She wanted to make a point that by allowing ourselves to approach nature with love, we will want to take care of it. 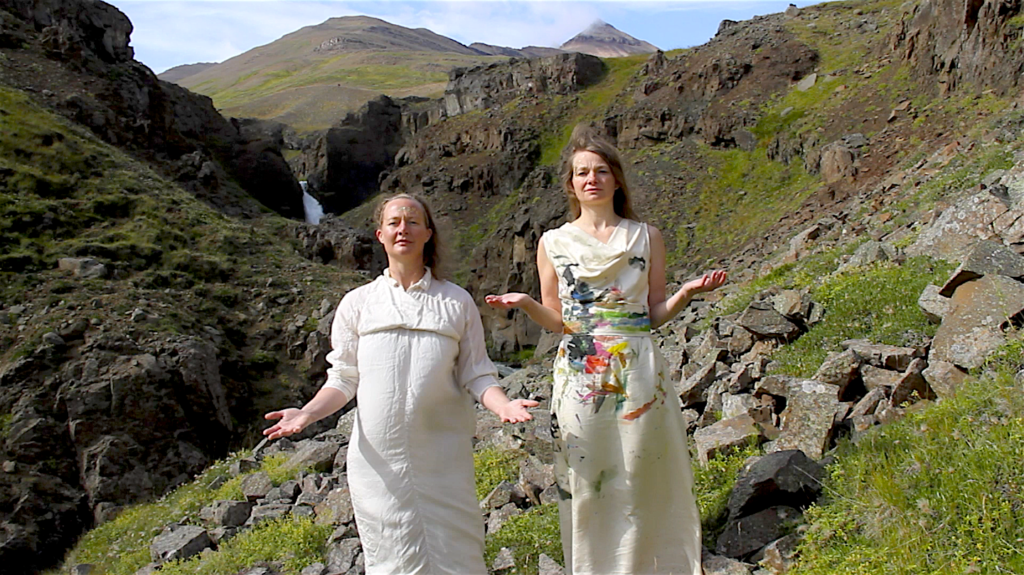