And Summoning the Spirits from the Gut

The first performance was at the sculpture of “Sæmundur á selnum” selected by Karl Benediktsson.  Magnea B. Valdimarsdottir is the performer.
– – –

From the second performance at the “Bríet Bjarnhéðinsdóttir Memorial” selected by Silja Bára Ómarsdóttir. The monument was designed in 2007 by the artist Ólof Nordal.

After the speeches, after the talk has finished, after the commemoration has taken place and the applause of the great assembly has died down, after they have explained the meaning, the metaphor and definition of memory, a quiet ritual takes place. A quick snip of the scissors and the curtain is drawn, rising with the crowd’s expectations. And the subject is revealed, but wait…there is a problem.

A less than desirable image tarnishes the proceedings. An uninvited guest has crashed the party. Below-average and almost invisible this figure has innocently ensconced himself within the bosom of politics, unwittingly fabricating a double-portrait of power and punishment. Embarrassed, he realizes he has blundered. He tries to explain but only serves to reinforce his marginality, highlighting his disrepute and his dereliction. In his attempts to remove himself he stumbles and with each mistake he causes more and more outrage from the mass, further tarnishing the proceedings, until at last he disappears from view. But try as they might these functionaries cannot erase this event, for the mark he has left is indelible.

Above everything perched upon a memorial to empire and latent power, he sits and watches. This statue is the essence of war and violence compounded by a conspicuous relocation, a further reminder of its shadow of suffering. A griffin crowned Nike, a gratuitous equation of political power symbols, indifferent to this excess he sits calmly upon its shoulder, closer to the heavens then the battleground.

His presence irreversibly shifts its meaning even after the film is over. Now we also think of him, the children staring up. All the whispered memories “The peace and quiet of Sunday…riding a bicycle with no hands…The beautiful stranger”. Campeniero, he is hailed for this patient listening. The calm that follows whenever he is near. Whereas the monolith is authority, sovereignty and power, he is intimacy, contemplation, patience and love.

A spring is tapped for the public’s thirst. But soon design replaces need, romance conquers utility, opulence defeats service, and corporeal satisfaction yields itself to the symbolic. When she arrives at first she wonders at its beauty then resolves to tests her own against it. Walking blindly into the cold water she is driven like Narcissus to see herself in its reflection, or rather she is driven by a stronger desire to see herself etched like a new statue upon the old. He looks on with horror at her impudence, her carelessness, but also with a little jealousy and longing to attain her platinum arrogance. Let beauty guide, nothing else; he follows and is drawn in. As dawn rises with twinkling music over their embrace they seem to awake to the embarrassment of their indiscretions.

The site cannot escape this romantic portrait. Tribute replaces design. When the actor died for one day the fountain lay dry and covered over by a black shroud. And as a kind of infinite ritual of commemoration tourists endlessly reenact the actor’s tryst but can never consummate before they are fined for their transgressions. 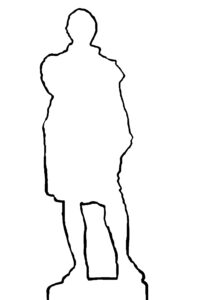 And Summoning Spirits From the Gut is a series of public performances aimed at investigating and representing stories surrounding three public monuments in Reykjavik, Iceland. The aim of the project is to present stories that in some way arise from or through public monuments. These stories might directly describe a relationship to a monument—by means of the sculptor, the person, thing or event that is commemorated—or indirectly recount an incident in which the monument was involved. The aim is to highlight personal, subjective and perhaps private or unknown perspectives onto a public site and thus demonstrate the contrast between a monument’s intended tribute and it’s numerous, alternative, yet not always conveyed representations.

These stories will be gathered through interviews with several people of different ages and different cultural backgrounds, living in the city. The stories will then be rewritten—including other references and the artist’s own personal experiences while in the city—from a first person perspective as if being recalled by the monument itself.

Three scheduled performances will be held, one at each monument site, where an actor will perform each story in Icelandic. The actor will speak while seated on the monument (if possible), or in someway inhabiting the space of the monument, and will be asked to project her or his voice from the monument in an attempt to present a story from the site, in a sense they will speak the personal through the public. Each performance will take place in front of an invited audience.