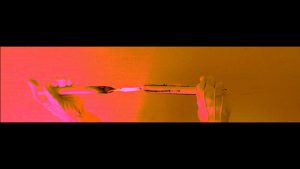 Habbý Ósk’s projects are often titled with verbs: sustain, slide, descend, remain. As much sculptures as experiments, Ósk’s works challenge gravity and its influence over time. How long can a pyramid of burning candles support itself? How will the number of viewers present in the gallery change how quickly the stakes fall? Can two columns of Jello stand on end long enough to be photographed? Osk’s video works similarly test such boundaries, often incorporating human interactions, such as stomping out territory, attempting to pass someone by, performing a blindfolded trust fall, and playing a three-way tug of war. These simple scenarios set up complex dynamics of intimacy, play, humor, and exasperation.

Habby Ósk combines her sculptural and filmic interests in Forever Us (2012), in which an object and a human are suspended in a state of tension. Two gloved hands appear on the sides of the frame, each holding a burning candlestick, one lit from the flame of the other. As they burn, the candles drip their wax and their length is decreased. The length of the video is determined by the time it takes for the flames to lick the fingers, at which point the candles are nearly stumps. The title of the video suggests that the candles could be a metaphor for a relationship, hinting at the tension and promise in a shared light that must inevitably come to an end. Let Go (2014) posits a similar scenario with two hands pushing and pulling the surface of a giant balloon, which will inevitably pop, or “let go,” given the right amount of pressure.