Gunnhildur Hauksdóttir received her MFA from the Sandberg Institute in Amsterdam in 2003 and is an active member of the Dieter Roth Academy. She has lived and worked in Amsterdam, Holland and Berlin, Germany until 2008 but is currently residing in Reykjavík, Iceland. She is a board member of the Living Art Museum and teaches at the Icelandic Art Academy. In 2010 she participated in a podium on performance art at the Anti festival in Koumio, Finland, organized a series of lectures with the German Philosopher Marcus Steinweg in Reykjavík in collaboration with The Living Art Museum, The Icelandic Academy of the Arts, The Icelandic Philosophy Association and the Icelandic Art Theory Association. As an artist Gunnhildur works evenly in sculpture, audio, video and performance. Among her most recent solo exhibitions are My Gift,Your Excellency (IS 2011), Audition (CA 2008) and Cultus Bestiae (IS 2008). Her most recent work in collective exhibitions are Mirrorriff (IS 2010), Howl (AU 2010) and Rockabilly Gal (DK 2009).

“…Using very simple and accessible elements, Gunnhildur creates forceful conceptual assemblies that can be read on many levels without the elements conflicting in any way. This is to say that her execution is strictly sufficient to construct the metaphors she intends to communicate and her thinking is clear and accessible, even though the conceptual content has wide association and can evoke

different responses from different viewers. The elements of her installations form a single coherent image…”

“…Gunnhildur’s work retains a lot of the characteristics associated with the Yellow House group1, most obviously perhaps the use of cheap materials and rough execution. They have an air of impermanence – a ‘temporary’ air reflecting the urgency associated with an art space that was always operating just days ahead of the wrecking crew…”

“…Gunnhildur has already explored the themes of consumerism, infantilism and cultural identity in works such as her 2002 installation ‘The Adorer and the Adored’ – focused on the symbiotic relationship between viewer and performer, artist and public – and ‘Meditation for Mama’ in 2004.

Her presentation and imagery is in her other work, personal but carries a well thought-out concept within a general and accessible frame of reference…”

At Sequences 2011 Gunnhildur will direct the lecture series that will take place in the Icelandic Art Academy between the 6th.-8th. of April.

Gunnhildur Hauksdóttir is one of the young artists who, in 1999, ‘took over’ a small ramshackle house in the centre of Reykjavik, in Skuggahverfið (the District of Shadows) just off the city’s busiest shopping streets. The house, old and scheduled to make way for a new development of high-rise apartment houses, had in recent years been home to Samtökin 78, the Icelandic Association of Lesbians and Gay Men. The young artists, most of them still studying at the Icelandic Academy of Arts, saw an opportunity and they seized it. They painted the house yellow and called it, simply, the Yellow House. For about a year it was the focus of a loosely-knit group of creative young people pursuing their art, music and social life with a vitality that contrasted sharply with the derelict surroundings. The house is now gone, the high-rises have been built and the artists have gone on to pursue their careers in the wider world. 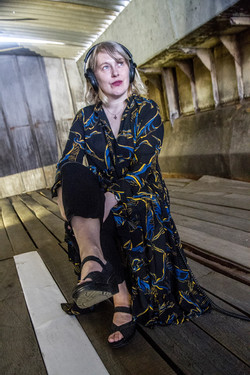