Work:
My heart in a broken nutshell

Working at the intersection of sculpture and performance, Florence Lam isolates, decontextualizes, and prolongs everyday actions. Her works test abstract ideas about perception, such as the materiality of time and weight, or the ways in which social conduct is communicated. In I choose to sleep (2016), for example, Lam slept in the gallery and observed how viewers responded to her sleeping body. For Gravity (2007), she undressed in front of an audience and ate apples until she returned to her clothed body weight. These performances are substitutions that require the audience to suspend their disbelief in order to resolve the work. They also test the materiality of the artist herself—what composes her body, how does it change over time, and how should one react to her corporeal presence?

With The Picture of Causality (2017), Lam looks specifically at language as a material that may constitute or structure experiences of time. The Hindu or Buddhist concept of “karma” is traditionally tied to reincarnation, as an explanation of how one’s actions in the present may influence, or be influenced by, one’s past and future. Lam excavates the meaning and potential of karma by analyzing how it is written in Chinese characters, which are largely pictorial. For her performance, which combines text, projections, and live commentary, Lam excavates the many layers of meaning that reside within the Chinese word for “karma” or “causality,” which is written as a combination of two words: cause/reason and effect/consequence. Lam draws further significance from these words and their component parts in her performance, in which the characters are projected as constellations and she, along with Icelandic students who are learning Chinese, describe the poetics of these linguistic and embodied expressions. 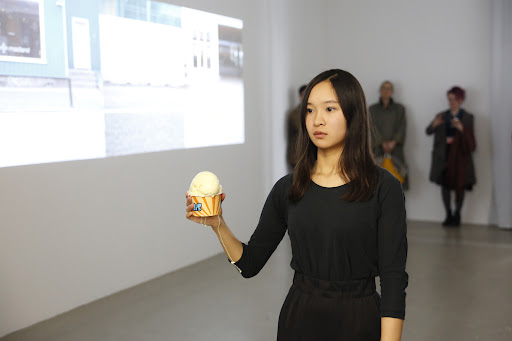