Ásgerður Birna Björnsdóttir compiles and fictionalizes images, narratives, and histories to create anomalous explanations for the real and mystical objects in our lives. By playing with scale, causation, and visual similarities, she highlights unusual coincidences within otherwise banal occurrences. Pulling at the strings of doubt harbored within us, Björnsdóttir contemplates how the moonstone in your ring may differ from the aerogel developed by NASA to collect galactic dust or whether or not we should believe in the geological explanation behind the Sailing Stones of Death Valley, which move on their own without human or animal intervention. Inspired by these phenomenological objects and their dubious origins, Björnsdóttir creates elaborate structures for her work: a scavenger hunt in a parking garage, a “drive-by” performance, a scattered PDF.

For Sequences VIII, Björnsdóttir will present All those elephants (2017) a sculptural work incorporating a theramin—an electronic musical instrument that similarly evokes the mystical through a physically-based, engineered process. The theramin, invented in the early twentieth century, generates electromagnetic fields which are sensitive to the distance of a body from their antennae. In order to change the sound they emit, a player simply changes the distance of their hands from the antennae. The touchless musical instrument emits eerie sounds that uncannily resemble a human voice. Björnsdóttir has engineered her own theramin that is similarly sensitive to the movements of viewers who circumambulate her structure. Instead of emitting its sounds into the surrounding space, her theramin transmits its sound into a distant space. With sound and source separated, she compounds the sense of mystery evoked for viewers in both locations. The title of the work references the proverbial “elephant in the room,” which for Björnsdóttir, are the intangible materials invisibly and incessantly working around us, from the electromagnetic fields that operate the theramin, to the billions of dark matter particles that are said to pass through us daily, to countless other waves, atoms, emotions, vibrations. 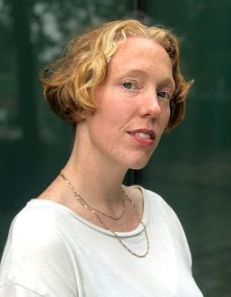